Till the Morning Comes 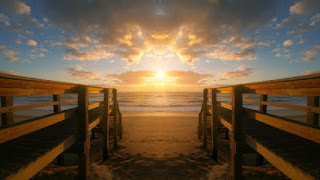 
During the time apart, slowly mouse grew to realize the house grumpiness, wasn't merely her imagination or a projection of her own needy feelings. It was real, the kids were over school, but physically they were stuck for two extra weeks. A lifetime in childhood but only a blink to an adult where months seem to pass like weeks, except now. It was painful being so far from Master. The siren call of the lake was strong and disturbed her sleep.

Twice she took down the container where the plug was stored, her fingers slid across the smooth texture of the box before opening it, silently begging for a sign that would allow her to break a rule. Master hadn't offered any permission to touch it, let alone decide for herself to insert. In her head she could hear the displeasure in His voice.

Each evening, once the house was quiet, alone in His study, mouse devoured the lengthy list of Expectations, like a devotional or sacred text, hoping it would soothe her. For the most part it worked, as her eyes poured over the you will's and you will not's, pausing over each of the 'never's'. Each evening mouse wrote Him a letter about the day, much like a one-sided conversation and admitted her transgressions, knowing full well she could be punished. Punishments were inevitable. It wasn't lost on her that nearly every thought or deed were sifted through His Expectations of Behavior.

During the day, keeping busy with house cleaning, piles of clothing to be sorted, shopping (new summer clothes), laundry, packing and repacking the car until the last day of school arrived and the house was thoroughly cleaned. The clothing was packed, cherished toys carried into the car as dawn broke in the East. Finally we were on our way, the seven day cooler loaded with meats sliding on occasion. With each passing mile our collective moods lightened, the letters mouse written stored in the glovebox. Each a confession of her loneliness and even if she didn't break an expectation, but wanted to, were included. At any time she could toss those letters out the window, or dump them at a rest stop trashcan and no one, including Master, would ever be the wiser.

The drive, despite a few trouble areas went well and with mouse hopped up on coffee we made excellent time. Master had made a reservation for us at our favorite pet friendly motel, and the children jumped almost at once in the pool, while the dog watched, ready to pounce into the water at the first sign of trouble. After a long swim, a meal of pizza from the local pizzeria, we settled to sleep and woke early to make the final push to the lake and Master. When the radio didn't work (we have some dead zones nothing can reach) we switched to the iPod, with "travel" music. Lots of songs about traveling or wherever home might be. The song (a guilty pleasure) "Leaving on a Jet Plane" came on and one of the kids remarked, "that's a song you aways sing when Dad's gone." Smiling, mouse explained that if you were leaving somewhere on jet plane it used to mean that you were going a great distance. Not all planes, back then, had jet engines and many were still propeller planes, like you see in old movies. Then since mouse was certain she was losing her audience, offered, "it's just because He's far away and He's missed."

The car had barely come to stop when the little one had unbuckled herself from the carseat and bolted from the car, not bothering with the front door, but running around to the side and the rear deck, from still inside the car she could hear the child scream "Daddy" and imagined her leaping into His arms, like she always did each night when He'd get home from work. As mouse was opening the back of car, she saw Him coming around the corner with our little one on His shoulders. He put the child down and gathered mouse up in a long embrace that she just melted into.

In no time, mouse was surveying what needed to be done, extra things, but Master really had managed well without her. Instead she focused on Him. Things felt awkward but after that first day, it felt like we'd been there the whole time. That evening, mouse handed Master all the letters she wrote. He asked a few questions, which mouse truthfully answered, like had she actually touched the plug or just the box? Just the box, but that was close enough. Master had only offered permission for mouse to pack the box, not to randomly touch it because she was feeling lonely. He said there would be a punishment, but not anytime soon. Too many family members around with paper thin walls. Of course apologies were offered, tears and sniffles knowing she'd disappointed Him -- when later He turned her around and used her for strictly His own pleasure. He took out the box that contained the plugs, and chose one of the larger ones (the one that doesn't allow sitting) and inserted that into her bottom. It felt large and foreign inside her after being free from it for so long. He also attached some weights He brought to her nipple rings and had her on all fours most of the late evening in our bedroom with His legs across her back while He reread each of the letters she'd written Him. He did chuckle at a few her remarks.

When He finished, He told her to ready for bed. He didn't sound happy or pleased, but annoyed, which in turn made mouse feel even more guilty. He told her to wear a night gown, the pink one He had instructed she bring. Sure enough around 4am Master's sibling did poke their head into the room to wake Master for some early morning fishing. Quickly mouse jumped from the bed, put on the robe that went with the nightgown and made coffee for the men to take along. Mules would have completed her ensemble nicely and maybe some curlers in her hair.

After a light breakfast, Master taking mouse aside gave her a few instructions before He left. After tidying the kitchen and opening all the windows, mouse went to shower and enema, then dressed, first in her capri pants and a sweatshirt, because it was darn cold out still. By the time Master returned the windows were still open, with the curtains drawn, and mouse was dressed in a sundress, the plug back in place, and mouse was busy preparing the hamburger meat into patties for dinner.

We usually only eat a couple meals a day at the lake, breakfast and an early dinner, then if anyone feels peckish, they can help themselves to left-overs, a salad or some fruit. The rest of her time was spent cleaning, vacuuming, and yes more laundry. When Master returned, He instructed mouse to switch plugs, to the smaller one that doesn't protrude -- not that she had much opportunity to sit. He found some dust in a corner and added that to the punishment list to meted out in the future.

Over dinner, outside, mouse pondered how many demerits she'd already accrued since she arrived. Unfortunately, while her head was stuck on herself she missed something. It seemed every time she turned around, she was making a mistake, which added to her nervousness. Within a few more days she found her groove and her attentiveness improved greatly. Why was this so difficult?

The day after the fourth of July celebrations, the family due to depart in a day or so, took the kids to the movies for the afternoon. Master used that opportunity to punish mouse for everything. Actually, if truth be told, mouse begged for punishment. The belt was used for a long time. The first blows took her breath away from the pain and she struggled to keep count and after losing her place, led to the enviable restarting the whole punishment. By the time He finished, mouse was sobbing and quite the mess, yet her head was clear.

Moving about without showing any discomfort was difficult under watchful eyes. Not that anyone really noticed anything that couldn't be explained by a different bed. The post punishment period is the time mouse likes best, if she's honest. It harkens memories of childhood and first day of a new school year or the even the New Year, when you make all those promises that this will change, before you begin that gentle slide. Within a few days, the physical pain had greatly diminished but the marks remained, as a reminder.

Slowly our guests began to pack up and leave -- everyone wishing they could spend more time. A feeling we're well acquainted with. Master took them all to the farmers market. It's open daily during the summer months, although different vendors sometimes have their own schedules and just a few flower people are there nearly daily. It's strange because people know us there, they know our children. The guy at the honey stand always hands out honey sticks to the kids and often directs mouse different varieties of honey. That day Master's sister-in-law cleaned him out of beeswax candles.

For now, it's just us and life feels slower -- and that seems the best way to end this.
Posted by mouse

I am glad you made it safe to Him & the lake mouse! Proud of you writing those letters & including everything,, even though you didn’t have to. Funny thing is, you kinda did have to... or you wouldn’t have felt “right” & that in itself is a beautiful thing. Enjoy your summer vacation, but do not forget us faithful reader! Big Hugs
Genna

I enjoyed reading this update. Glad you are now all reunited. Very sweet reading about the little one greeting Daddy :) wishing you a wonderful summer together:)