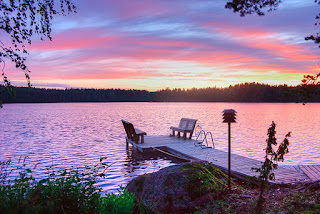 Master was mulling over the latest predicament, because of the horrible weather over our winter the school district was faced with adding more days to the school year. Kids will be in school effectively until the end of June. That doesn't give us a lot of time to get the lake house ready for visitors, so Master was mentally going back and forth with it all. Finally, He settled on an odd choice. He will leave for the lake as scheduled. Saturday morning (remember Father's Day here was Sunday), He loaded up the car and started to drive. The idea, as planned months ago, was to beat the weekday traffic. Friday morning, mouse served Him breakfast in bed and gifts were handed with dinner. The rest of the evening He packed for the long drive and in the morning after a quick shower and a rather long fuck, He was on the road.

All last week, knowing He would be leaving mouse was busy preparing meals for Him, things He could just pop into the microwave oven. He said not to worry, He was perfectly capable of getting the house ready on His own. His siblings will begin arriving later next week and we'll be leaving very early on the last Saturday of June. He was actually looking forward to a few days to fish and relax. Also ahead of the trip, Master decided on some huge changes, after reading an environmental report on lakes, He has barred our family from bringing any plastics to the lake.

At home we do limit plastics, we use lots of glass containers for storing left-overs, we don't use plastic wraps or food storage bags, opting instead for reusable ones that can be fussy and old fashioned waxed paper for school lunches. At the lake, however, we have placed more on convenience. Food purchased in plastic throwaway containers, packages of hotdogs or hamburger wrapped in cellophane, and often we'd use paper plates with plastic knives and forks when serving a crowd. Master said no more to all of that. We replaced all the plastic cups with stainless steel tumblers.

Carefully He made a list of all the things we'll need for the summer (with mouse's help). We got some reusable bags that will hold up to 5 pounds of flour or sugar or whatever that mouse will fill before we leave and drive those down with the other things she's bringing along during her journey. No plastic water bottles will be allowed this year. Master said He'll install a water filter and we do have a reusable huge water jug that's like you'd see in a hotel lobby already at the lake house. Master said we might getting a second one for home or just bring it back and forth, but He feels it will be a better solution.

Phoning from the road Master made good time, His slave, wasn't doing nearly as well. After a week or more of focusing on His journey, mouse felt that cord that tethers her to Him, stretched out. Cleaning helped, cooking and doing all the usual things helped. As much as she'd like to pretend that it's just another trip, this is longer than usual. At most Master will be gone a few days -- four or five at the most. Now it's going to be two weeks before...

Can't think about that. Just need to keep pushing forward, making sure the items are checked off. Going through the clothing to make sure we don't bring too much. Before leaving Master had marked her body and after her enema she looked at those marks, running her fingers along them. Picking up her phone she sent Him a text message, "Thank you!"

Dealing with more than usual grumpy children, their own summer seemingly cut short. It's a rub, mouse can empathize with. Each morning last winter there was an excitement with the report that school had again been cancelled. Of course, we adults knew, nothing comes without a price or a penalty. Yet, mouse can't help to feel she's being punished for the weather, doubly so.

Eventually this too will pass, we will be on the road for the lake and hopefully there will be enough summer left to leave it all behind. Soon enough the rush to return home, resume schedules and replace the summer fun with back-to-school shopping will be upon us.

I'm sorry the weather has played havoc with the school year and messed up your plans for summer at the lake house. I think Omega going ahead of you to start getting the house ready will hopefully make things easier ultimately.

You will all be there together soon. I hope you have a wonderful summer once school finishes. Good on you too for the ban on plastics.