Wouldn't it be Lovely? 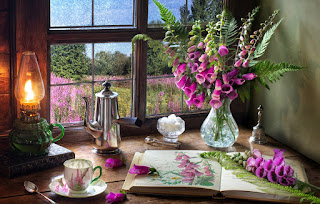 I enjoyed reading this. Never read the little house books but avidly watched the tv show back in the day. I haven't read or seem Outlander either. I must be one of the few on the planet lol.

You do wonder how people got on without all the mod cons of today. I even wonder how we got on growing up now lol. I think I'm too attached to do without them now.

I used to read a lot but don't anymore, I totally get it. Also, I love my clothesline so much, I have heard of that rule before but it's beyond me. The thought that people have laundry is to appalling to consider?

Sounds like life at the lake is good, I think we have all learned to appreciate the little things this past year.

Best to you all!

Oh my original comment disappeared and I hadn't finished, I'm not sure what happened, possibly my pressing a wrong button! I'm very new to blogger and still learning how to navigate my way around, perhaps for the best I feel I may have talked too much.

Regardless, reading your post made me smile, I'm very similar in attitude in regards to books, I haven't read or watched Outlander I shall have to google, if you haven't you might enjoy Bridgerton on Netflix, quite raunchy/romantic and set in the 1800's but with a modern twist to it.