It's been over a week since Master's punishment of mouse was implemented. It ended rather unceremoniously the following Thursday when again the topic was revisited. The attitude was much improved, according to Him and He was pleased overall with the change. This was perplexing for His slave since she didn't see a huge shift in her behavior. It mostly circled around letting Him handle family disagreements. Instead of losing her temper, she simply quietly explained that whatever wasn't allowed, and if there was a problem they could speak with Him.

It worked. Instead of getting caught up in a circular argument. It just stopped and then by mirroring the behaviors that we want them to emulate things calmed down. Meanwhile, it was like being in a cave for mouse. Master still not allowing her in the bed, sometimes making her write lines well into the evening on the floor by candlelight, using her for His own pleasure. Inserting the large plug when it pleased Him most, watching her suffer through the enema and struggle to bird bath bathe in the empty tub. Yet, doting and doing things for Him, drying Him off after a shower, drinking His piss when He directed it. 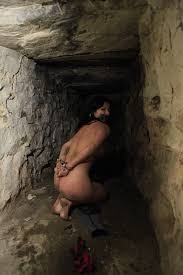 In the evening it was much like being in a cave mentally for mouse, alone, feeling adrift yet, tethered securely to Him. There was something unsettling about it all. Did He hate His slave? Was He so angry with her or merely disappointed that now He decided she wasn't worth further effort?

Yet, He showed no anger, and offered praise even, like when mouse went to the grocery store and came home with lots of healthy foods (as well as some well loved snacks for the kids). He was pleased that there was now a posted weekly menu for dinnertime. The kids now almost as rote would appear and begin setting the table, which of course mouse would check to make sure it was being done correctly (as the week went on they got better).

Still that unsettled feeling really rankled mouse. He spoke later that understood but it was ultimately part of the lesson He wished her to learn, His authority is really absolute and her position isn't just a given thing. It's earned and given freely by Him and as He demonstrated, He can take it back whenever He wished to. It was like being led into the sunlight again. He was the sun and mouse merely an object caught in His orbit. There was something comforting in that. Those continued to swim through mouse's mind.

That feeling of containment.

Still there are plenty of times where He's telling terrible Dad jokes, He's cuddling mouse, He's always kind and generous and obviously she loves when He's a bit more Daddy than Master. The fly in the ointment is that we go too long with "Daddy" the Master must appear to reassert His control, because honestly mouse becomes too used to Him forgiving her and begins, probably like most people, to take that for granted. It's not to suggest He has never taken mouse for granted -- He has and admitted it in His own postings here.

However, anytime it's brought up one truth is inescapable, His slave functions far better when He is a little cold and distant. It's like there's a clear line where mouse knows "do not cross" or "keep off the grass." It makes her feel safe and that strong lull of containment.

Wow, it sounds as though Omega handled the situation in the best way. I'm so glad to hear things have returned to some normalcy and that the household as a whole is running even smoother than before.

I can definitely understand you feeling unsettled. "Feeling adrift, yet securely tethered to him"...I love that!

I can't imagine what was going on in your mind! I know I'd be trying so hard just to get the tiniest nod of approval, it's a difficult headspace to be in.

It sounds like things are lots better and I hope it continues to go in a good direction.

Thinking of you all :)
Fleur41