Master came home in a mood, a meeting a rare face to face meeting hadn't gone as planned and Master had to travel. He wasn't thrilled about this but said very little about it. He didn't watch as mouse took out His case and began to pack for Him. He wouldn't be flying, instead He would make a long drive (thankfully, He really doesn't mind driving). His case was packed with the usual dress suit, a few extra shirts and ties, and casual clothing He would need for the trip. It seemed a lot of effort He would never consider for a meeting that would only last a few hours.

That evening He had mouse on her knees on the chaise lounge and took her from behind, He reached the spot between her legs, and told her to rub her clit. His hand over hers as she rubbed it, while being rutted from behind was overwhelming. Permission was granted to orgasm and she cried as she came. Then He pushed her hand away and manipulated the tender clit until she came again as He exploded into her cunt, leaving her feeling marked by Him. When He noticed a few drops on the chaise, Master had her clean it by licking it up.

The following morning He loaded His suitcase, told mouse to be a good girl. He looked over the lunch she had packed for Him to enjoy on the road and thanked her. No thanks was needed but she accepted it graciously. It was dark still when He departed and mouse watched until His taillights vanished before returning to the house which suddenly felt empty. He left no devices for her waste time with. The iPad, laptop remained locked but she had access to the phone which she carried with her so she was sure to not miss a text or call from Him. Master hadn't said He would call from the road but she was hopeful He would.

Of course she wasn't alone, in a really empty house, instead the house was full of morning excitement that He was missing (and to be honest probably glad for it). By noontime, He had phoned and mouse felt better. He was making excellent time. It seemed almost silly but mouse felt such a pang of misery because He sounded happy and she was sad without Him. As mouse cleaned she thought (and she knows she's not supposed to do that) about how different she is now. How much Master has really changed her in the best of ways, her mind is so much settled, focus is greatly improved, of course He is the center of her universe. A cold chill ran down her spine, her mind went dark, and those horrible "what ifs" played in her head. Was this what death is like?

It sounds silly but while it's not expressly forbidden Master prefers that mouse not pester Him a lot. If He has a meeting outside the home she isn't to bother Him. If He contacts her then it's fine, but not really the other way around. As mouse can attest, it's annoying to get a text message while driving. Still these thoughts wouldn't leave her and she fired off a text to Him that she more or less instantly regretted. He called a few minutes later. He was fine, and as we spoke she calmed down, only to ramp up the moment we got off the phone.

Long after dinner He phoned again saying He had arrived and was settling into His hotel. He didn't regret in the least making this long drive. That evening mouse fell asleep hugging His pillow wearing nothing but one of His old tee-shirts and feeling silly while doing it. His meetings the following day went well. He could hear the stress in mouse's tone and assured her He was doing well. He led her through some breathing exercises and spoke gently to her. All that made her feel even worse. Reminding her how very broken she is without Him.

Master returned home the following evening He carried with Him some truck-stop flowers and gifts for the kids. As mouse removed His shoes she cried a little from the joy of having Him home. Also that evening He allowed her to pleasure and love His body. In the morning we had a more difficult discussion. It was the if anything should happen to Him talk that mouse hates thinking about. Since mouse has been thoroughly tethered at least mentally, if not physically to Him -- there are things He doesn't want her to worry about. We should live in the moment and not worry about the future -- but trust that He's thoroughly planned for it. He made sure, once again that mouse knew where all the important papers are kept. The number of His attorney and everything else needed. He left instructions for everything. It's something every year or so He must remind mouse of and He will endure the choking sobs from His slave until He's finished.

Master is never harsh about it. He knows it's something He must do for His own sanity, knowing how dependent the slave is on Him for practically everything. It's important to note, He wants her this way He loves her this way. As much as He needs to control her, He also needs to be pragmatic about His control. He held the slave as she cried and was soothing -- it was what she needed from Him.

Undeterred Master quickly changed gears and reestablished His control over mouse when she was prattling on and on, a quick slap to her face reminded her that she was again property, her body was ruthlessly examined and was fucked soundly before enema that He administered personally (something He now does infrequently -- allowing mouse a teeny bit of agency). It's humiliating to endure, especially the end, with Him there. A big reminder that the only privacy mouse is allowed is because He allows the privacy. He went through the questions noting her discomfort about who owns her and the like. Reaffirming that He does own her made her body quiver.

When He said rather casually that He does love her, she let out a sob and splintered into a million pieces that He rather calmly put back together. Then He showered with her and had her dress for the day. Master kept the day low key not wanting to put extra stress on her and watched her as she went about her chores. Even the ironing. Cooking the evening meal was extra wonderful because Master sharpened all the knives and cut up the vegetables, lifted the heavy dutch oven into and out of the oven and watched as the table was set (the kids handled that and the clean up after). Family movie night was a success and later we were back in the master bedroom, 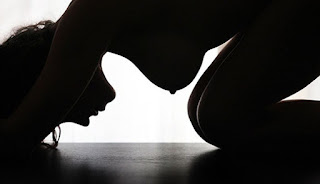 Master mused that it was good for her to remember that cock is her Master (specifically His). Twice during the night she took it gently into her mouth and sucked the head. Not so much as to wake Him fully, just as an expression of her devotion to it and to Him. The second time, His body began to respond so mouse continued to lick and suck it, to her knowledge Master never woke but claimed to have had a really dirty dream (He mentioned it during His usual morning oral service). Feeling so very open and much like a vessel for Him to use as He feels fit, is the most exciting part of being a slave. It just deepens that connection to Him.

Great to hear from you Mouse :) I enjoyed reading this am glad it sounds like Omega was able to reassure you when you needed it.

Happy to hear from you mouse! Seems as if y’all are safe and doing well with your new normal.

I was just thinking the other day we hadn't heard from you in a while. Sounds like all is well, I really enjoyed your post.